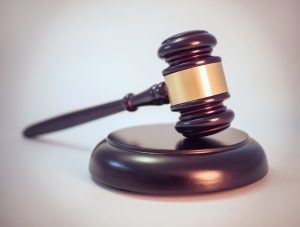 You and your attorneys have won! After nearly two years of pre-trial preparation, involving obtaining and reviewing medical records; depositions of witnesses, doctors. and experts; countless motions, meetings, and phone calls, your case was argued and won before a jury of your peers.  Finally, it’s over and now, finally, you will receive your just compensation.

Except that, sometimes it is not over. What happens when the defendant appeals your verdict?

What is an appeal?

In simple terms, an appeal is the process of asking a higher court to review the actions of a lower court. In Virginia, personal injury cases are tried in the Commonwealth’s “trial courts,” the Circuit Court. Personal injury cases are appealed directly to the Supreme Court.  Other types of cases, like divorce, worker’s compensation, and criminal, are appealed to the state’s Court of Appeals.

What is the basis for an appeal?

Throughout the trial, the judge’s function is to rule on legal questions. What issues should be presented to the jury? Is an expert competent to testify? Should the jury be permitted to hear certain evidence?  The judge also decides to sustain or overrule objections from the attorneys. Those decisions are often the basis for an appeal.

Only “issues of law” may be appealed.

Neither side can appeal a jury verdict just because they lost and disagree with the result. The Supreme Court has described the 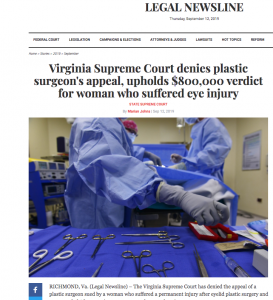 What happens during the appeals process?

Step#1:  The Petitioner (party making the appeal) must file a notice of appeal within 30 days after the final order is entered in your case (which usually is on or near the day the verdict is rendered.) The Petitioner then has 60 days to submit court transcripts containing all of the relevant parts of the trial being appealed.

Step #2: After the notice of appeal and transcripts are filed with the trial court, the file is then sent to the Supreme Court of Virginia.

Step #3:  The Petitioner then has to file a brief, called a Petition for Appeal, within 90 days of the judgment. In civil cases, there is no right to an appeal; instead, the Supreme Court must agree to take the case for review.  The Petition for Appeal is how a party asks the court to grant the appeal.  The responding party (usually called the “Appellee”) must file a brief explaining why the court should not take the case, and that brief is due within 21 days of the petition being filed.

Step #4:  A “writ panel” of three of the seven justices of the Supreme Court conduct a hearing. If two of the justices agree to take the case, then an appeal is granted.

Step #5: Both sides then file briefs for the court’s review. Then the entire court — all seven justices — hears oral argument from both sides. Each side receives 15 minutes to argue its case. 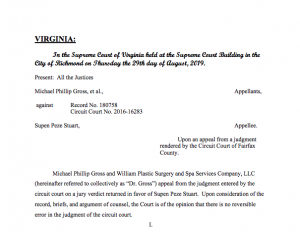 Final Step: The Supreme Court issues its decision in an opinion, which explains why the court ruled as it did.  The decision is usually issued within a few months of the oral argument.

How long does the appeals process take in Virginia?

VA law provides interest when the jury verdict is affirmed.

While it is unfortunate that our client had to endure 18 months of waiting, VA law provides for interest to be paid from the date of the verdict until the appeals process is completed. In our case of Gross v. Stuart, interest of 6 percent was added, making the final judgment a total of about $874,000.