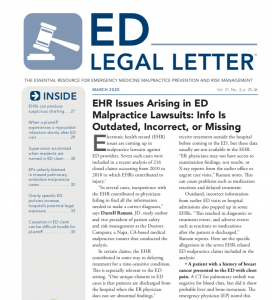 The March 2020 issue of “ED Legal Letter” features a discussion by Gary Brooks Mims on the difficulties of establishing causation in malpractice claims against emergency medical providers. Mims cited as examples several of his cases where the emergency physicians failed to diagnose stroke, resulting in serious injuries. The failure to diagnose the stroke, Mims explained, was clearly negligent but what makes the case difficult is the issue of causation. In the article, he says, “If the ED defense can prove the injury would have happened regardless of the ED physician’s treatment, even if the treatment was negligent, the ED physician would get off because the negligence would not be a proximate cause of the injury.”

“ED Legal Letter” is a monthly publication for “emergency medicine malpractice prevention and risk management. Mims is quoted in the article “Causation Difficult for Plaintiff in ED Malpractice Claim.”