I am a medical malpractice attorney who has, unfortunately, represented many stroke victims. Failure to diagnose stroke occurs too often and leaves patients with debilitating injuries. And, all too often, those permanent injuries could have been avoided. I recently witnessed how the failure to diagnose stroke occurs when a friend of mine was rushed to the Emergency Room. It’s an instructive story for us all, about stroke, how it is diagnosed, and how it can be missed.

This is a personal story. I received an urgent call from a friend who said her husband — a 40-year-old in good health– suddenly developed headache, distorted vision and difficulty standing.  They had gone straight to the emergency room.  Since I’m a medical malpractice lawyer who’s represented many stroke victims, I was asked to meet them at the hospital.  When I arrived, the symptoms had subsided and I was told that stroke was ruled out. I asked how was it ruled out?   Well, he passed the NIHSS (National Institute of Health Stroke Scale) and a CT of the brain didn’t show a stroke.

But the treating team was wrong. The young father of two had indeed suffered a stroke.

There are two types of stroke and a CT scan can only rule out one of them, a hemorrhagic stroke, and 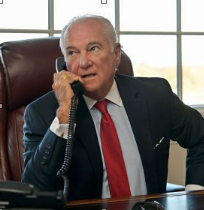 does not rule out the other, an ischemic stroke. An ischemic stroke occurs when a blood clot blocks blood flow. How did the ER team miss this? They failed to take a thorough history. A few days before this incident, the patient developed sudden and severe neck pain, right around the area where the vertebral artery rests.  At my urging, the team ordered a diffusion-weighted MRI which revealed that he suffered a small stroke in the cerebellum. Another test, an MRA, revealed that he had a torn or dissected vertebral artery, which had allowed a clot to form and travel to cerebellum, resulting in an ischemic stroke. 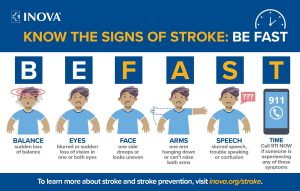 Ischemic stroke can be successfully treated IF the patient gets medical help within 4 to 5 hours of the onset of symptoms—in which case a drug called tissue plasminogen activator (tPA) can be used to dissolve the clot and restore blood flow before permanent damage can occur. In some cases, the clot will dissolve spontaneously, and tPA is not necessary. This was the case, fortunately, for my friend, and tPA wasn’t warranted. At first blush, one might think this case would have been a “no harm, no foul” situation since the clot dissolved on its own.  Not so. The patient still needed a full diagnosis. The dissection needed to be diagnosed so the patient could be put on a blood thinner while the dissection healed. Otherwise, the patient was at risk of being released and yet another clot forming, causing a potentially more serious stroke.

How did I know the medicine?  Because unfortunately I have represented many similarly situated patients who were not so lucky.  In one case, the client was involved in a relatively minor car crash, and 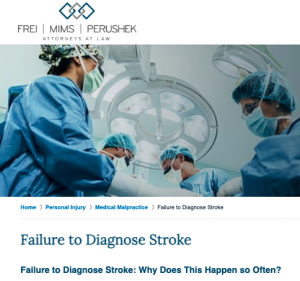 she developed a stroke because the seat belt went across her neck and caused a dissection of the vertebral artery.  Another case involved a young woman who was hit in the neck with a softball. Emergency physicians sent her home with a diagnosis of dehydration and the next morning she awoke with a stroke and permanent mental and physical disability.  In another case, a fifty-year-old suddenly became “ill, dizzy, headache, inability to walk.” At the emergency room, the CT was negative, the headache and nausea resolved with medication, the patient was discharged with a diagnosis of dehydration. No one checked her gait, which would have revealed the neurological deficit.  The next morning, the patient awoke “locked-in,” meaning she could move only her eyes. She had suffered a major stroke.

Read more about our work with failure to diagnose stroke cases at https://www.freimims.com/failure-to-diagnose-stroke.html