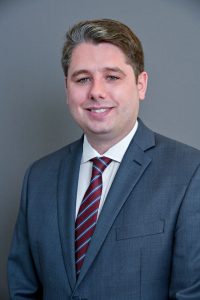 The personal injury law firm of Sickels, Frei and Mims announced that Matthew Perushek has been elevated to partner, effective January 2020.

“Matt is a smart lawyer who has been dogged in pursuing the right results for our clients. He shares our commitment to meticulous preparation and passionate representation of our clients. We are proud to now call him partner,” said Gary B. Mims.

Since joining the firm in 2013, Perushek has successfully tried and settled personal injury cases throughout Virginia.  He has also successfully argued before the Supreme Court of Virginia, including the 2019 case of Supen vs. Gross in which the Court affirmed the Mims-Perushek trial victory in a botched plastic surgery case.

Perushek is an active member of the legal community and has been recognized as a Rising Star by Super Lawyers since 2015 and as a Top 40 under 40 by the National Trial Lawyers Association. He is on the Board of Directors of the Fairfax Bar Association, is on the Board of Governors of the Virginia State Bar’s Young Lawyers Conference, and is active in the Virginia Trial Lawyers Association. Perushek has earned Martindale-Hubbell’s AV Preeminent rating, its highest peer review rating, held by just 10 percent of all attorneys.

In 2012, Perushek earned his J.D. with honors from the Antonin Scalia Law School of George Mason University and then served as clerk for the Honorable Michael F. Devine of the Fairfax County Circuit Court.  Originally from Minnesota, Perushek was a member of the U.S. Junior National Curling Team, winning a World Junior Championship and competing at the U.S. Olympic Trials for the 2010 Olympics.