Why Confidential Settlements are a “Necessary Evil.” 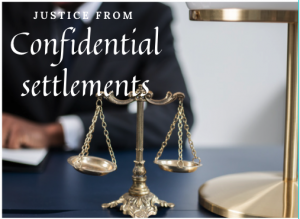 Keeping a settlement agreement confidential is often a prerequisite for the defendant to agree to a settlement.  We have settled many cases for millions of dollars, yet the defendant (or its insurer) will insist upon confidentiality and a release that denies liability.  Really…you’re paying millions of dollars but deny you were negligent?  Obviously, the defendant knows it is liable, but for several reasons, it does not want others to know.  For example, a hospital that settles a wrongful death case may not want other potential plaintiffs to know what the hospital is willing to pay under similar circumstances.

Many plaintiffs want more than compensation—they want to protect others from similar wrongs.  We agree with that sentiment.  But what can we do when the offer to settle is fair but conditioned upon confidentiality?  We often get the defendant to permit us to tell the story of what happened and just keep the parties confidential, this way the public can learn of the event.  Not long ago we settled a “failure to diagnose stroke” with such a modified confidentiality agreement.  In that case, the plaintiff appeared at an emergency room with complaints of sudden headache and what felt like vertigo.  She was taken to the emergency room where she was diagnosed with dehydration and released only to return hours later with a full-blown stroke. If she had been timely diagnosed on the first visit, she could have avoided any permanent brain damage. One reason the emergency room didn’t diagnose stroke was that the patient did not present with numbness or a droopy face—but she had equally but less known symptoms of stroke: a headache and an inability to walk in a straight line (signs of a cerebellar stroke).  By being able to report our settlement, we were able to make others aware of this type of stroke.

Our law firm tries and often succeeds in securing a commitment from the defendant to rectify what caused the injury and thereby prevent others from suffering the same injury—without confidentiality. CSX railroad agreed to lower train speeds after a derailment killed a 15-year-old boy. Another case where a golfer was injured from an errant ball off the course practice range resulted in a net and other modifications to prevent similar injury—again, without confidentiality. Also, the head physician of an internal medicine practice vowed to modify protocols after a patient died from prostate cancer and was never screened until the patient had symptoms and it was too late.  Another example is a settlement with a military hospital that allowed an intubated patient to die when hospital personnel failed to notice that an endotracheal tube was dislodged while moving the patient.  As part of a million-dollar settlement, the hospital agreed to adopt protocols that called for continuous CO2 monitoring of all intubated patients, even during transport (the lack of CO2 being expelled by the patient is a sign of inadequate oxygenation).

We have just resolved a case involving catastrophic injury and the terms of that settlement are strictly confidential. Agreeing to the settlement resolved the case more quickly for the plaintiff, which is especially beneficial for those with catastrophic injuries. As a condition of this multi-million-dollar settlement, the defendant committed to making changes to avoid similar injuries.  Hearing the defendant commit to “right the wrong” was as meaningful to the plaintiff as monetary compensation and, in many ways, even more meaningful. “Righting the wrong” has tremendous meaning for us.