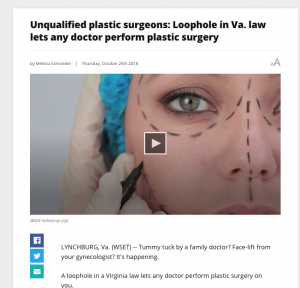 Mims presented evidence that the procedure his client needed should have been performed by an ophthalmic surgeon — one who specializes in surgery involving the eye and surrounding tissue.  Through the testimony of expert witness, Mims successfully argued that the plastic surgeon violated the standard of care by performing an operation for which he was not qualified.

The Virginia personal injury law firm of Sickels, Frei and Mims has once again been ranked in the 2019 U.S. News – Best Lawyers “Best Law Firms” list.  The firm has earned this distinction every year since the list was first published in 2010.

The firm is especially proud to announce that Sickels, Frei and Mims has earned the top tier ranking for the Washington, D.C. region for both Medical Malpractice – Plaintiffs and Personal Injury Litigation – Plaintiffs.

Firms included in the 2019 “Best Law Firms” list are recognized for professional excellence with persistently impressive ratings from clients and peers. Achieving a tiered ranking signals a unique combination of quality law practice and breadth of legal expertise.
END_OF_DOCUMENT_TOKEN_TO_BE_REPLACED

Sickels, Frei & Mims attorneys have again been recognized as among the top 5 percent of lawyers in Virginia by Super Lawyers. Firm attorneys have been named to the list every year since 2007.

Associate Matt Perushek was named to the Super Lawyers Rising Stars roster for the fourth consecutive year.  Matt was recognized under the category of Personal Injury General, Plaintiff. Only 2.5 percent of Virginia attorneys are Rising Stars, which recognizes attorneys who are forty years old or younger or in practice for 10 or years or less.

END_OF_DOCUMENT_TOKEN_TO_BE_REPLACED

Why “reasonably calculated” language must be changed.

The scope of discovery is improperly stretched by insurance companies and defense attorneys to gain overly broad access to plaintiffs’ medical records, according to an article recently published as part of the “Practice Tip Series” on the Virginia State Bar website.  “Reasonably Calculated: Confusion Over the Scope of Discovery” was authored by Sickles, Frei & Mims attorney Matt Perushek.

END_OF_DOCUMENT_TOKEN_TO_BE_REPLACED

The course must be completed within 12 months of becoming an active member of the Virginia State Bar, as established by the Supreme Court of Virginia in 1987.  The course faculty is drawn from “among the best judges and lawyers in Virginia who have a deep commitment to the principles that underlies the Rules of Professional Conduct and inspire professionalism in the practice of law.”

END_OF_DOCUMENT_TOKEN_TO_BE_REPLACED

McDonald’s Hot Coffee– Lesson for Trial Lawyers
The telling of stories is a natural way for people to learn and convey ideas. In fact, it is so natural that at times people will complete lessons they think they have learned by inventing facts that fit their perceived story. This is particularly problematic for trial lawyers. If you tell an incomplete story to a jury–someone will complete it for you and do so through their own experiences, real or perceived. Once a juror has completed your story, it becomes the only story and will guide that juror’s thinking and communication with his fellow jurors.
END_OF_DOCUMENT_TOKEN_TO_BE_REPLACED

On December 14, 2012, a 36 year old man entered a primary school in central China, intent upon injuring school children. He was apprehended after injuring 20 students, with no fatalities. Two days later, a 20 year old man entered an elementary school in Newtown, Connecticut with the same intent–but with hugely different results. In Newton, Connecticut, 20 children and 6 adults were killed and the police were unable to apprehend the shooter before he fatally shot himself.
END_OF_DOCUMENT_TOKEN_TO_BE_REPLACED

(Fairfax, VA – Nov. 1, 2013) — Fairfax personal injury law firm Sickels, Frei & Mims has earned a Top Tier, National ranking in the medical malpractice category by US News and World Report’s annual edition of top law firms. The firm is also listed in the top tier ranking in the Washington, DC metropolitan area for medical malpractice and personal injury, for both defendants and plaintiffs.

The firm has been recognized by US News since the inception of its Best Law Firms rankings in 2010.
END_OF_DOCUMENT_TOKEN_TO_BE_REPLACED